The Indian Railways are a hot topic of discussion ever since the train accident that killed 60 people on Friday in Amritsar. Perhaps no engine driver has ever been so ardently discussed as the one who was driving that train. People have taken positions for and against him, debating threadbare what he could or could not have done to avert the disaster. What the general public does’t know is exactly what life on the railway track, seen through the windscreen of an engine, is really like.

Through the front windshield of an engine, a driver has a semi-panoramic view of the landscape ahead in the daytime. In the nighttime he-or she-can see up to 150 metres ahead, on the tracks. From this vantage point an engine driver also bears witness to the relationship that ordinary people have with the railways and the tracks they run on. This relationship, from the accounts of two engine drivers working in Punjab, is a complex and not always constructive one.

Seen through the eyes of 36-year-old engine driver Paramvir from Firozepur, and young assistant driver, 27-year-old Sanjay Kumar from Uttar Pradesh, driving a railway engine is a perilous, dull and adventurous task-all these equal parts. The people they encounter can roughly be divided into five categories. But first, here is how they see the job itself: “Being an engine driver is not at all risky in normal circumstances but in abnormal circumstances anything can happen — like such a big accident took place in Amritsar,” says Paramvir. 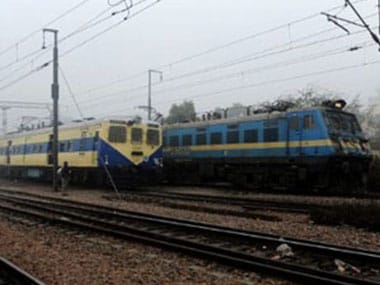 “Sometimes animals land up on the tracks and we try to save them by applying the brakes if there is time.” Some drivers are so sensitive, he says, that even running over a dog on the tracks is too painful for them. They sound the engine horn, reduce their speed (if they are not going too fast) and try to frighten the dog off

But what really affects an engine driver is not the animals but the first category of people they come across while on the job. This is the people who try to commit suicide by falling under the wheels of a passing train. These attempts are something the engine drivers are forced to witness and find the most troubling aspect of their work. In the experience of these two experienced hands, unfortunately, those trying to die deploy many a stratagem to beat even the most cautious driver.

“Some people stand a few metres away from the tracks, appearing very nonchalant, but when the train gets close to them they suddenly jump in its path,” says Paramvir. These are the people who have absolutely determined that they will die in a certain way and give engine drivers no time to stop. “We can stop the train if someone is far away enough even. But the ones who jump in at the last minute just get crushed,” says he.

The first time this happened to Paramvir — who joined the Railways in 2008 — he was only 26. He was stunned by the sudden death of a 65-year-old (roughly) lady who laid herself across the tracks in a trice. There was nothing he could do to stop, for he was just 15-20 metres away from her and was moving at around 90 kmph. The woman had, just seconds ago, been walking along the tracks as if nothing was amiss. Then she was dead.

After every such incident the locomotive driver has to inform the next station in writing. He is regarded as a “first witness” to such events. The responsibility for this paperwork is actually with the guard, who is present on every train. In the case of a DEMU, or a diesel electric train, there is no engine driver’s assistant. Because the rules forbid leaving train engines unattended, the guard alone goes off to file a report in such cases, after inspecting the injured-who usually don’t survive.

Their report includes details such as the last kilometre mark the train crossed before the incident, whether the individual jumped in from the left or right side of the tracks and other minute details. Those attempting suicide avoid doing so at stations because there trains move at very slow speeds. It is in open country, when the driver is usually at a higher speed, that the jumpers show up.

A part of the burden of guilt after such cases naturally weighs on the hapless train driver. He knows he does not have the flexibility to manoeuver his train the way a driver of a vehicle on regular roads has. A train must at all times remain on the track and the driver is helpless against people determined to die. “The first time it happened, it really hurt that someone died under my train,” says Paramvir.

Though Sanjay Kumar joined the railways almost a decade after Paramvir, he, too, has experienced suicidal people coming in the way of tracks. “It is a terrible feeling,” Sanjay says. Both wonder what could have brought those people to this position. “Either they must have problems in life or with their families,” Paramvir muses.

The second category of ordinary people whom the engine drivers say they encounter most often are the careless, talkative kind. Though not as melancholic as the jumpers, they perhaps seek time away from hustle and bustle of life on the tracks. The drivers see them daily, walking along the tracks with cellphones or ear phones glued to their ears. They are often so distracted by their conversations or perhaps by music and videos, that they don’t notice approaching locomotives. “The track is a very peaceful and quiet place until a train arrives. You can say whatever you want there without anybody hearing. So boyfriends talk to girlfriends, husbands to wives. They forget where they are and these accidents happen most frequently,” says Sanjay.

The drivers also report a third and very peculiar kind of person they encounter quite often. Some people, when they see an approaching train, pretend they are unaware of its passing by them. They keep walking on the track, seemingly engrossed in thought or with their mobile phone. Just when the train gets perilously close to them, these odd people jump aside. This perverse habit, both Sanjay and Paramvir have witnessed not just once but several times on their regular routes in Punjab.

This, seemingly innocent trick, confuses engine drivers. They try to second guess what a track-walker will do when they see one — ‘will he jump aside or come under, has he seen the train, or heard it, or not’ — the drivers wonder. “Sometimes, those genuinely unmindful of an approaching train get hurt because of the antics of a few,” Sanjay bemoans.

Then, drivers encounter a fourth category of people, who are the seasoned intruders of railway tracks. Such people, if you ask the drivers, are accustomed to whiling away the hours by the railroad. Some drink, party and make merry by tracks. Somehow they can always sense a train coming their way and avoid its path. Yet, they are always too close to passing trains, if you ask the drivers, and seem to enjoy living on the edge.

At times such people offer a drink to the drivers as they pass by. The rules forbid drivers and assistants from drinking on the job. They are tested twice for alcohol, before and after each trip. Unlike drivers on regular roads, for whom legally permissible limits of blood alcohol exist, no alcohol is permitted for train drivers. A beep signalling positive for alcohol on the breathalyser easily results in suspension. Nevertheless, there is a category of people drivers routinely encounter, who try to entice them into drinking.

News of what happened in Amritsar on Friday reached the other locomotive drivers more than one day after the incident. Both Sanjay and Paramvir shudder at the thought of what that driver must be going through, mentally and emotionally, after such a disastrous trip. They empathise with those who lost their lives and speculate about details of the case that have reached them, only from the newspapers or TV. The drivers have been talking over th past few days about other accidents on the tracks. In some of those the public thrashed the engine driver, the guards, even passengers and often damaged trains.

“After road accidents the driver flees from the spot because he knows that the public can get angry enough to kill the driver and burn the train,” Paramvir says. This, then, is the fifth category of people who are to be found by the railway tracks but as any driver would confirm, it is the one sort that no driver would ever want to encounter.