Making a statement after his resignation, MJ Akbar said that he finds it appropriate to step down from his office as he is seeking justice in a court of law in his personal capacity to challenge the false accusations levelled against him. The minister added in his statement that he is grateful to the Prime Minister Narendra Modi and External Affairs Minister Sushma Swaraj for the opportunity they gave him to serve for the country. 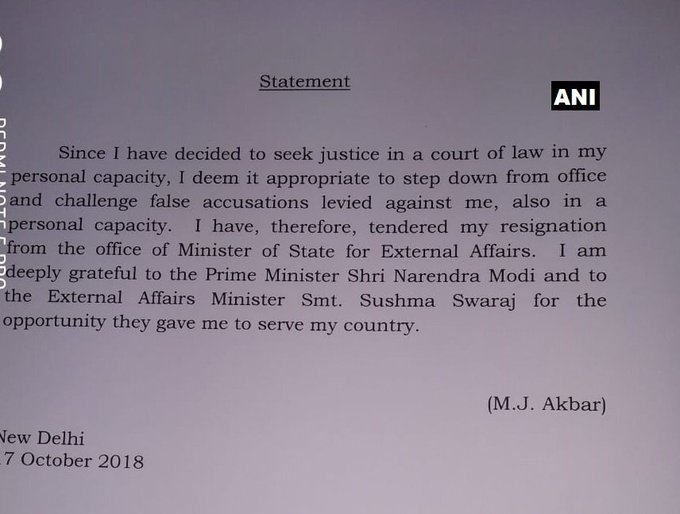 #MJAkbar resigns from his post of Minister of State External Affairs MEA.

Speaking on MJ Akbar’s resignation, Union Minister Ramdas Athawale termed it a right decision as the opposition was mounting pressure on him. He further said that the case should be properly investigated.

Reports say that Akbar tendered his resignation after the intervention of Prime Minister Narendra Modi. Amid the #MeToo storm, allegations of sexual harassment by women journalists was continuing to grow following which the National Security Advisor (NSA) had informed Akbar about PM Modi’s decision to tender his resignation, say reports.

Speaking after Akbar’s resignation, one of the women journalists who had levelled sexual harassment charges against the minister, said that she feels vindicated by his resignation and is looking forward for the day when she will get the justice in the court.

NCW chief Rekha Sharma while speaking on this development said that Akbar’s resignation took some time as there must have been some inquiry which could have taken place. She added that Akbar has finally took the decision and this is what matters.