Akhilesh Yadav, former Uttar Pradesh chief minister and Samajwadi Party chief, on Tuesday tweeted that he was “detained” at the Lucknow airport after he was stopped from boarding a special flight to Prayagraj city, 201 km from Lucknow. He was scheduled to attend a function of the Allahabad University Students’ Union on Tuesday afternoon.

Samajwadi Party workers protested across Uttar Pradesh, leading to clashes with the police in several areas.

Photos tweeted by Mr Yadav from the Lucknow airport show a police officer standing at the stairs of the aircraft, blocking the path to board. In another photograph , Akhilesh Yadav can be seen arguing with a police officer on the tarmac. A video put out by his media team show a man in lilac shirt stopping him from boarding the flight parked at Lucknow’s Chaudhary Charan Singh International Airport. Mr Yadav can be heard shouting “haath mat lagao (take your hands off me)” before a member of his security team pushed the official aside. Sources told NDTV the man was an Uttar Pradesh government official. 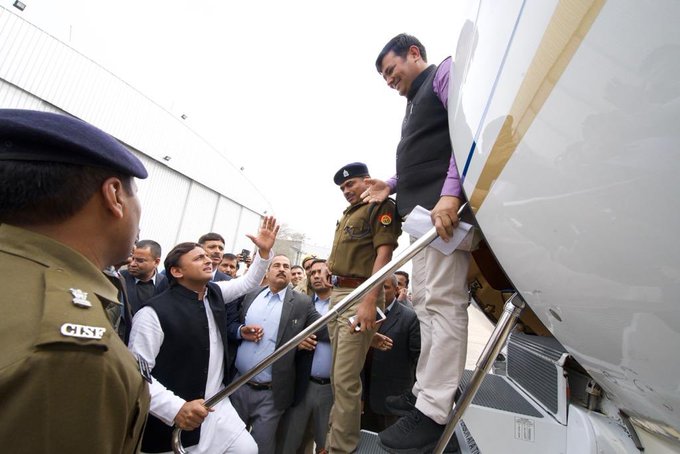 I was prevented from boarding the airplane without any written orders. Currently detained at Lucknow airport.

It is clear how frightened the govt is by the oath ceremony of a student leader. The BJP knows that youth of our great country will not tolerate this injustice anymore!

“The government is afraid of oath-taking ceremony of a student leader and is stopping me at the airport to prevent me from visiting Allahabad,” Mr Yadav said.

Calling it “remote control politics of two-and-a-half men”, Akhilesh Yadav said the schedule of the event and a travel plan was sent to the authorities. “I had informed on December 27, 2018. But the government put a spoke in the wheel,” he said in a press conference after he left the airport.

Mr Yadav accused the government of putting his “house under surveillance, plotting blasts near the event venue in Allahabad and burning down the office of the students union president”. “When I looked out of my house at 6:30 am, I saw officials there,” he said.

Allahabad University, meanwhile, had written to Akhilesh Yadav’s personal secretary on Monday, informing him that politicians are not allowed for events at the university. 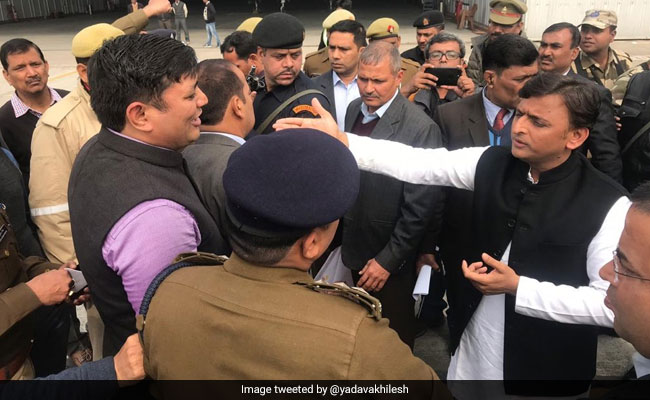 Akhilesh Yadav left the Lucknow airport after he was denied permission to board the flight to Prayagraj.

The Prayagraj police said Mr Yadav was denied permission to enter the university campus by the university administration, fearing law and order problems. “The police’s job is to ensure that law and order is not disturbed , and that any action is taken to see to this,” police officer Nitin Tiwari’s public relations officer told NDTV.

“The Samajwadi Party should refrain from its anarchist activities. Allahabad University said that Akhilesh Yadav’s visit may create law and order problem because of the dispute between student organisations. Hence, the government took this step,” Chief Minister Yogi Adityanath said.

Samajwadi Party’s student wing workers who protested in Prayagraj were baton-charged by the police. Dharmendra Yadav, a lawmaker, was injured in clashes with police after he tried to enter the university.

The incident rocked the Uttar Pradesh assembly. Samajwadi Party legislators tried to raise the matter during Question Hour in the assembly.

Bahujan Samaj Party chief Mayawati, who formed an alliance with Akhilesh Yadav for the national election, described the episode as “anti-democratic”. Other opposition leaders like Mamata Banerjee and N Chandrababu Naidu too condemned the incident.

In 2015, when Akhilesh Yadav was the chief minister of Uttar Pradesh, Yogi Adityanath, who was then the BJP lawmaker from Gorakhpur, could not visit the university for a similiar students’ union programme after protests by the Samajwadi Party’s youth wing.

In the past few days, students affiliated with the Akhil Bharatiya Vidyarthi Parishad(ABVP), the youth wing of the BJP’s ideological mentor Rashtriya Swayamsevak Sangh (RSS), have led protests at Allahabad University against Mr Yadav’s proposed visit to the university.